Addition and subtraction are definitely my favorite concepts to teach. It really is so much fun! I especially love using stories to go along with the lessons because they really help to provide a real-world context for solving problems. Over the past couple weeks, we read lots of stories, played tons of fun games, and even ate some yummy snacks! Many of these activities are now in our math centers for the kids to practice independently... 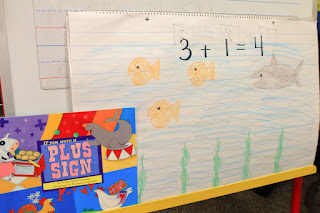 "If You Were a Plus Sign" features tons of cute addition stories in a variety of different contexts. After reading, we made up our own addition stories and drew them on chart paper. The kids took turns telling the stories using words and then writing the number sentences. Then we made our own class book of addition stories! Click here for the Addition Story Template.

We read Animals on Board by Stuart Murphy, which features some simple animal addition stories. Then we used animal puppets to act out our own addition stories. While students acted out the stories, the rest of the class wrote the addition sentences on their white boards. For independent practice, we used bear counters and zoo work mats to model addition problems.


The next day, we used a felt board and animal props to model more addition stories. I just came up with this idea on the spot but the kids loved it! They took turns choosing animals, saying the addition story, and writing the equation. Then we did cut and paste addition stories from The Moffatt Girls! You have to check them out...they are super cute!

We had so much fun with this one! I made a simple ladybug work mat and the kids had to roll a die two times to see how many dots to place on each half of the ladybug. They recorded the number sentences on their white boards. Then we made a ladybug addition craft. Didn't their little ladybugs turn out super cute?! Click here for the Ladybug Work Mat.

We read One Fish Two Fish Red Fish Blue Fish, then I brought out some Goldfish Crackers! First, we used the crackers to model addition stories and write the equations. As an assessment, they had to draw an addition problem in the fish bowl. Click here for the Fish Addition Template.

We read the book Domino Addition and practiced as a group using extra large dominoes. Then I put baskets of dominoes on all the tables. The kids had to choose a domino, draw the dots, and write the addition sentence. Click here for my Domino Addition Sheet.

I made two versions of this one (5 and 10). The kids shook up a cup of 2-color counters, colored the recording sheet, and wrote the number sentences. Click here for the Spill & Add Sheets.

We read Benny's Pennies and then practiced decomposing number 5 with this super simple game. The kids shook up a cup of 5 pennies and drew H for heads and T for tails. Then they wrote the number sentences. Click here for the Penny Toss Sheet.

We pretended to go shopping at the toy store for this lesson! The kids took turns choosing two items from the store, and the class had to model the addition with pennies to show how much money they would need in their piggy bank to buy the toys. The "shopper" got to model the problem on the board with magnetic pennies. Click here for the Piggy Bank Addition Mat.

We sang Five Little Ducks and used fuzzy sticks and beads to decompose the number 5. This idea was inspired by Deeanna at Golden Gang Kindergarten! She is sooo AWESOME!

That's all for tonight! I hope you've found something you'll be able to use with your own class. Next up...subtraction!!